Julien St-Georges Tremblay is an art historian and master’s candidate in art history. His thesis is on the interrelationship between ephemeral intervention art and land. Starting in 2013, as he was writing his thesis, he was a cultural mediator for the Musée national des beaux-arts de Québec, the Symposium international d’art contemporain de Baie-Saint-Paul, and Mois multi. His work as a writer includes the introduction to the 2017-2008 catalogue of the cohort of Première Ovation grant winners. As a cultural reporter, he has contributed to the magazines Inter, Art actuel and Vie des arts. Since 2015, he has been the musical director of the cultural magazine À l’est de vos empires.

Théâtre Périscope, a former synagogue, strikes a balance between the plausible and the false. Sometimes a word, a silence, or a narrative detail suffices to draw doubt from conviction, whether spiritual or theatrical. The exhibition Détails nécessaires(?) is a response to the tension of the credible at work within this space, as the three artists manipulate “details” like compelling formal tools. Do we prefer to immerse ourselves in an artist’s world by engaging with an element in discord with those surrounding it? Or do we require a meticulous arrangement of myriad ornaments to let our senses be carried away?

Nathalie LeBlanc skillfully blurs the distinction between inside and outside by projecting images that are neither fixed nor moving onto a window to the concrete staircase leading to the basement.

Delphine Hébert-Marcoux occupies the black box of one of the rehearsal rooms, adding dynamics with perforated panels, motors, mirrors, and light sources to produce videos.

Antoine Lortie paints grand scenes of warrior nymphs straight from a videogame universe. The contrived digital appearance of the images is highlighted by their interplay with video projections.

The three formal propositions are either estranged from or in symbiosis with the spaces of the theatre through which the public moves. Viewers are therefore encouraged to experiment with exuberance yet also discreetly with the triggers of illusion. 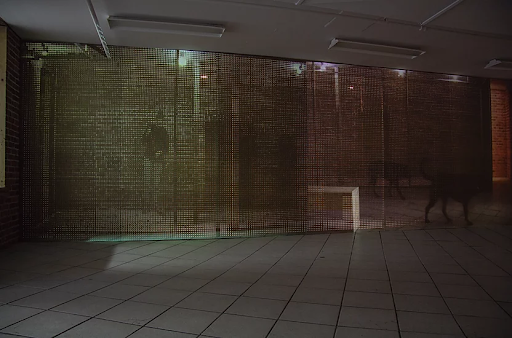 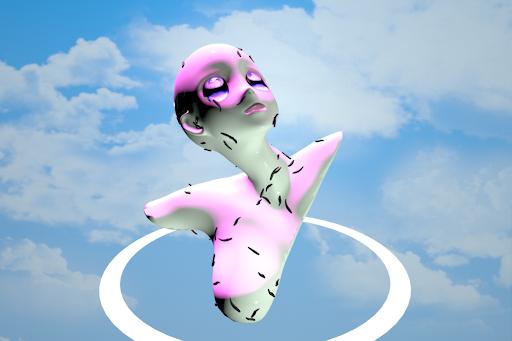 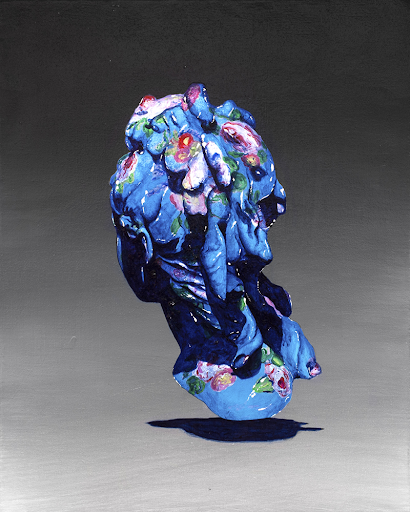