Against the Run, 2022, installation

Against the Run features an actual street clock, erected in a public space. Despite its somewhat anachronistic appearance – evoking a bygone era, when we didn’t always carry the time in our pockets – the clock furtively melts into the urban landscape, unnoticed. It reveals itself only when someone stops to look and, perplexed, observes the face turning counter-clockwise, as though trying to escape the ineluctable forward progress. And yet, despite its counterintuitive movement that makes it nearly impossible to read, the clock always shows the right time. Our familiar experience of telling time, normally second nature to us, has been upended. 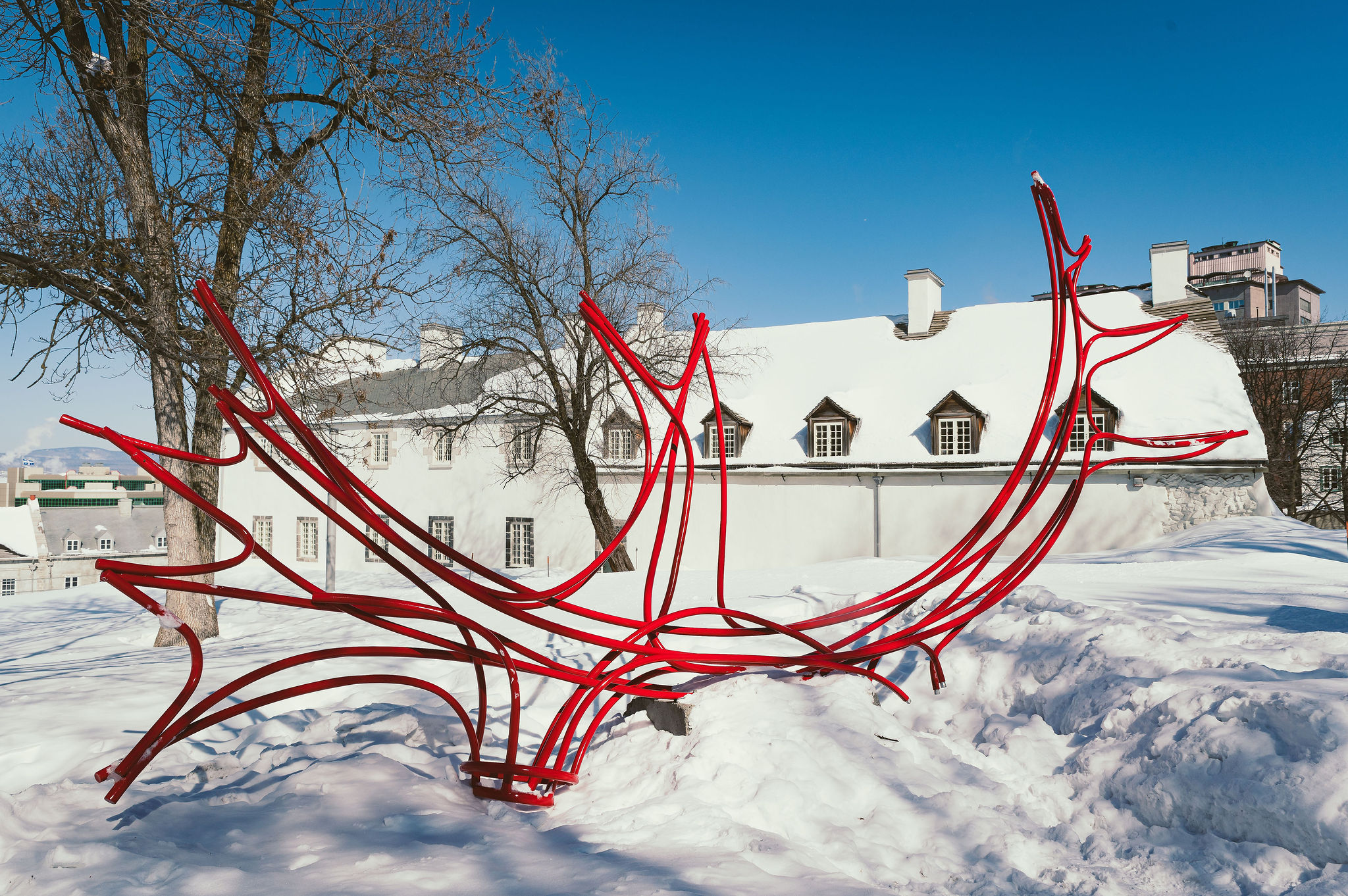 In Artillery Park, a monumental pair of antlers is raised against the sky. In their immensity, they suggest the antlers of a colossal caribou shed at winter’s end to make way for new ones to grow, in the perpetual cycle of regeneration. This now-vulnerable species, a key element in both the cosmogony and the survival of many Indigenous communities, has become emblematic of claims for land and identity. 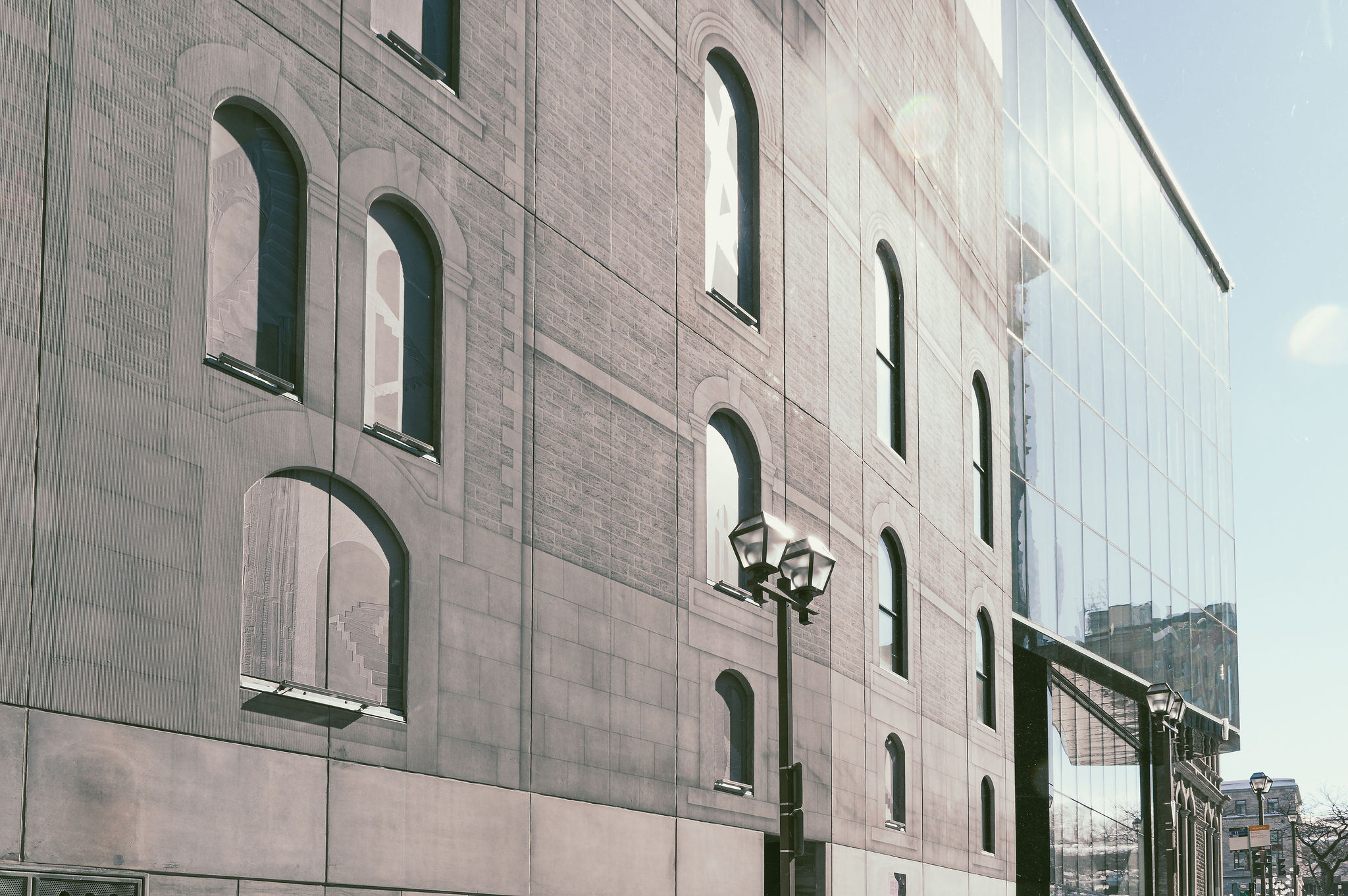 Caroline Cloutier is interested in the reflective function of specular and photographic images, and in their power to evoke virtual spaces. She uses mirrors and large-scale photographic prints as devices to create the illusion of disjointed architectural surfaces. 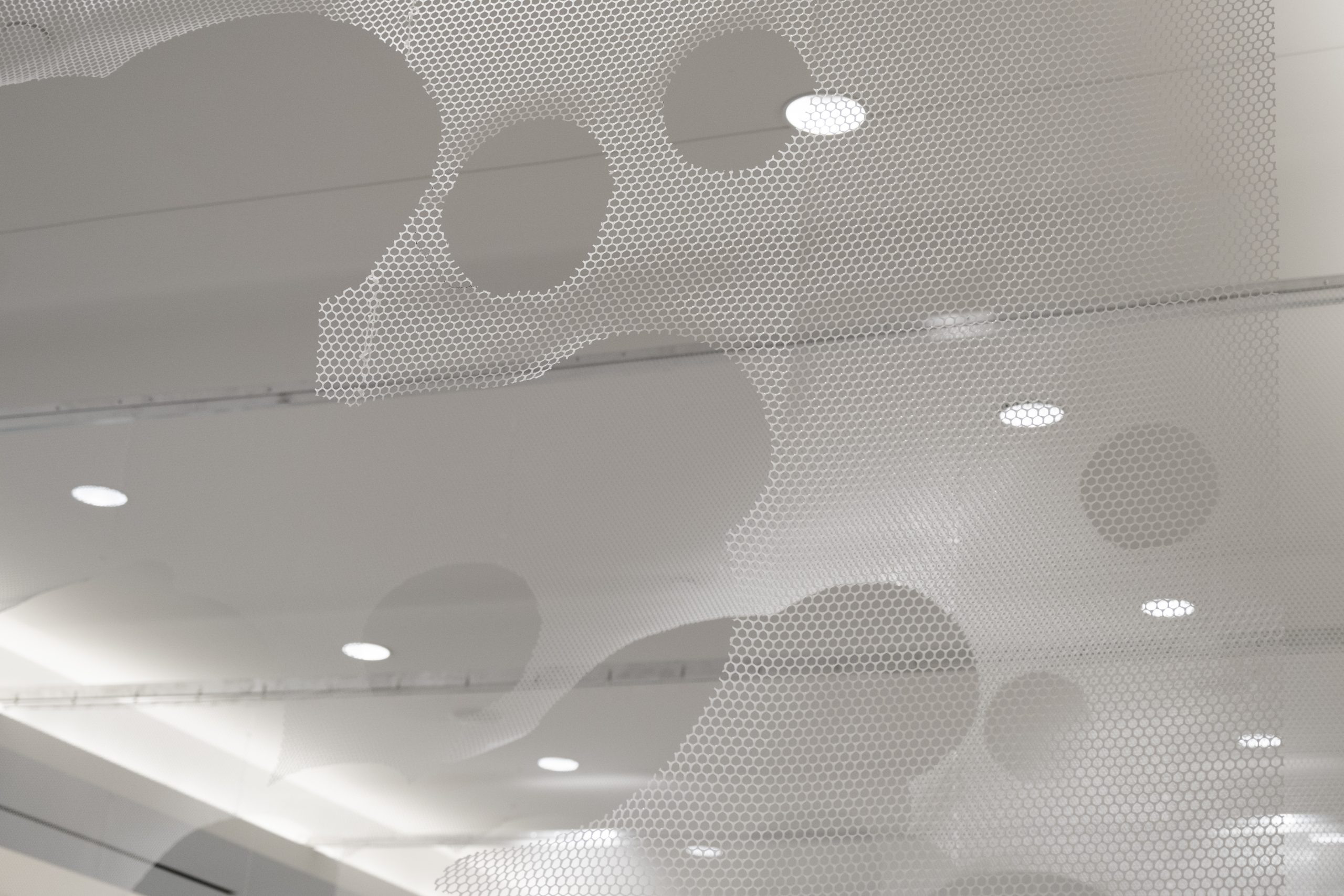 Big Break features a series of screens through which a path is carved, first limited and defined, then wide and organic. The transparent materials draw spectators to immerse themselves in the work and discover its true nature. The artist pulls inspiration from traditional theatre sets, where successive elements are placed at varying distances from each other, creating an illusion of perspective for spectators. Once viewers know the secret, they can choose a different experience from one visit to the next by entering either the big or the small door.

Her self-portraits, presented in public spaces, represent symbolic figures from the history of photography with extraordinary accuracy and meticulous recreation. Wearing dons hyper-realistic silicone masks featuring the single disconcerting detail of holes cut out for her eyes, short-circuiting the illusion and revealing its constructed nature.

© Gillian Wearing, Me as Madame and Monsieur Duchamp, 2018. 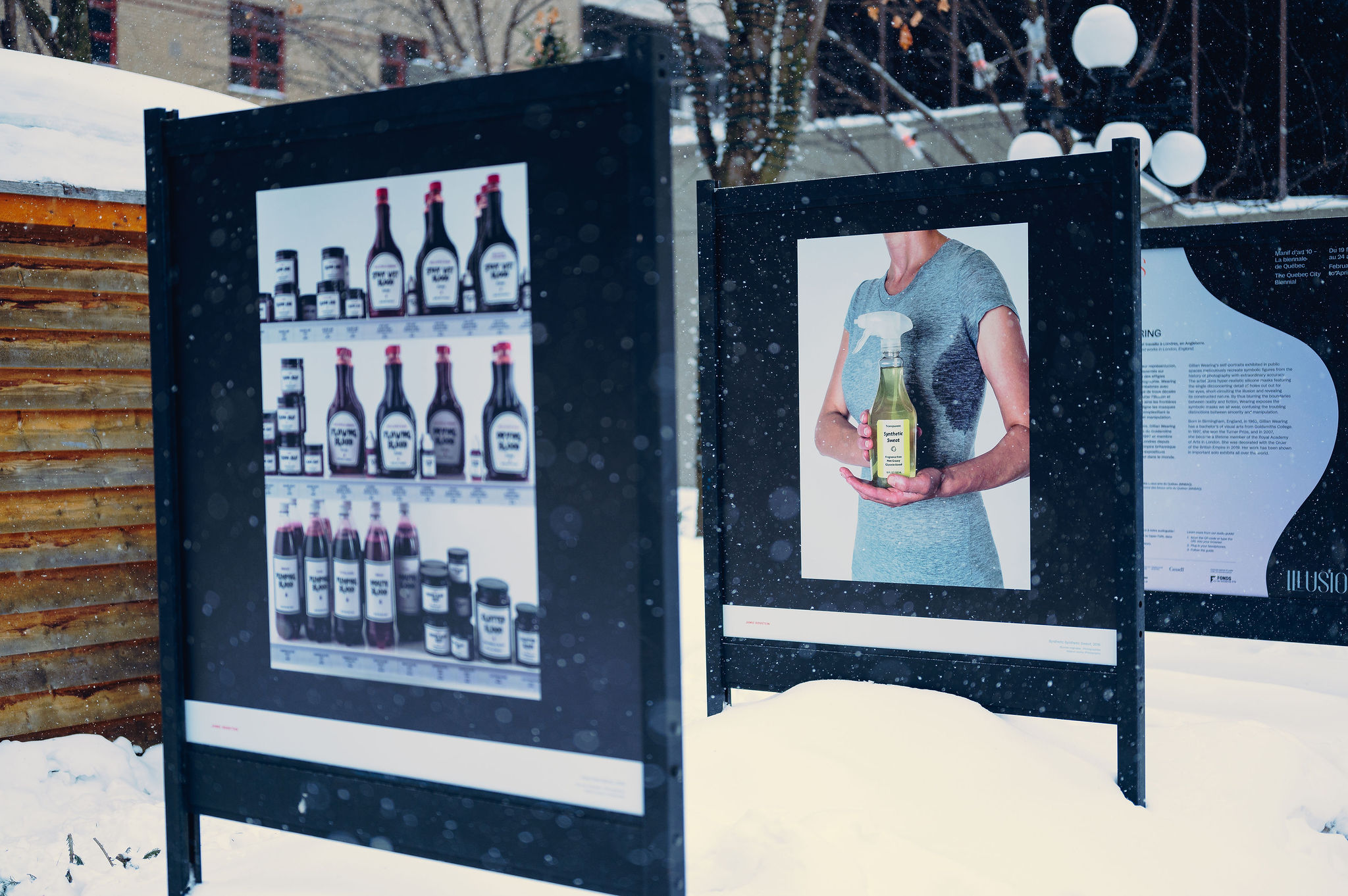 Gabriel Lester’s films and installations are born of a desire to build ambiguous narratives that leave themselves open to interpretation. His multidisciplinary works generate perceptual tensions through the apprehension of the immanent mechanisms of our representations of the world.

Invisible Museums of the Unseen, 2022, a GPS-activated audio experience.

Invisible Museums of the Unseen offers a GPS-activated audio experience of an invisible path through a public space. A mobile app provides participants with an unconventional audio guide and an interactive map using landmarks to orient and lead them to “invisible museums” of sound. The environments are built around the natural and physical phenomena of the world of the unseen: sound waves, gravity, atmospheric pressure, microscopic elements, camouflage, and echolocation. 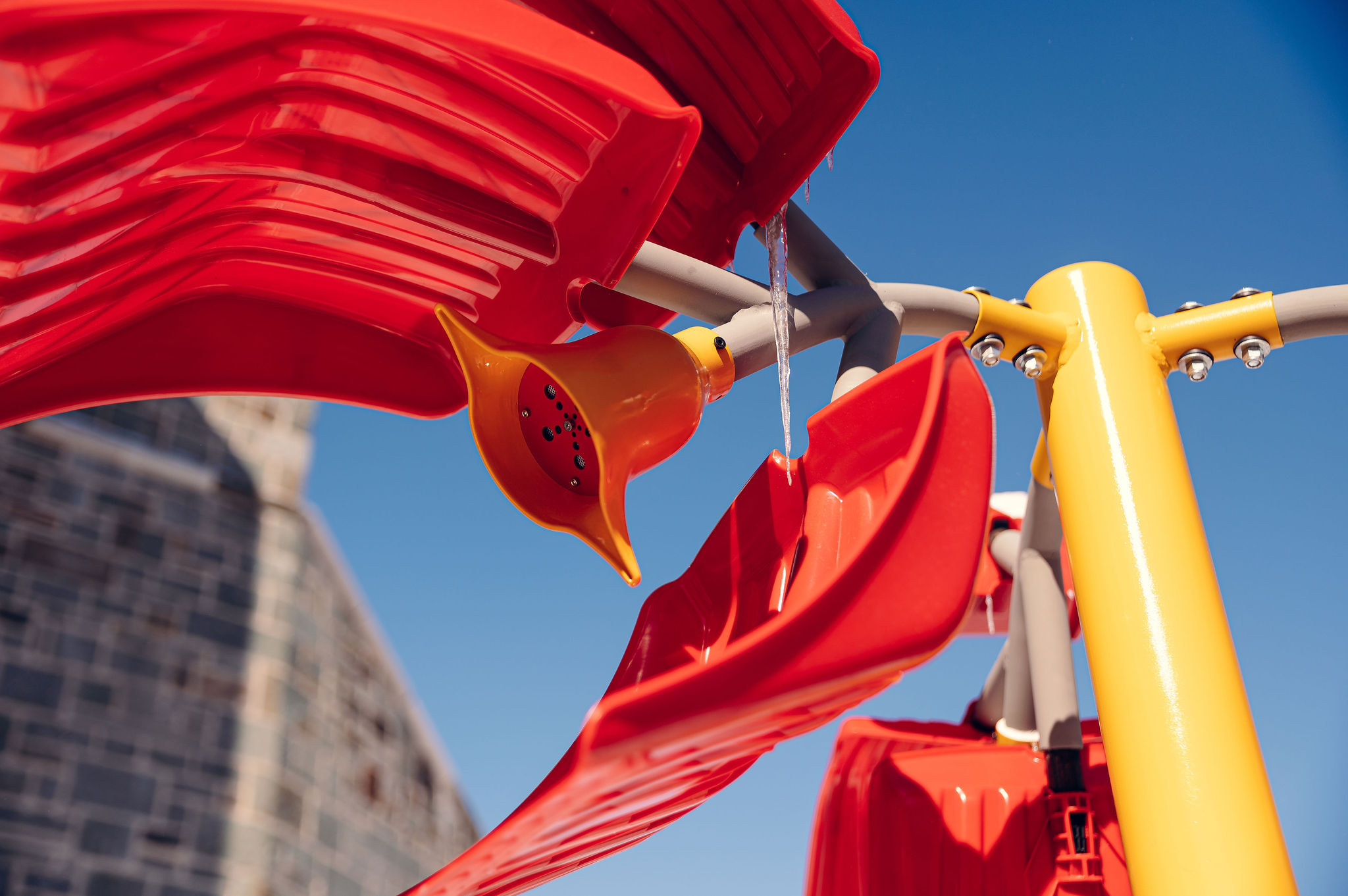 La pelle du printemps is an interactive sculpture that builds and grows, branching into multiple offshoots, a metal and plastic tree clashing with the landscape. Snow shovels and their handles are fragmented and reconfigured into this peculiar arborescence that reaches out to beckon passers-by, inviting them to play. A turn of the shovel-handle cranks produces a chirruping sound, a kind of simulated birdcall urging spring to return. The animal sounds, combined with the formal equivalence established between a shovel and a bird’s beak, accentuate the incongruity between the industrial materials used in the piece and its organic invocations. Once again, Gauthier blurs the line between the manufactured and the natural.

In collaboration with Avatar 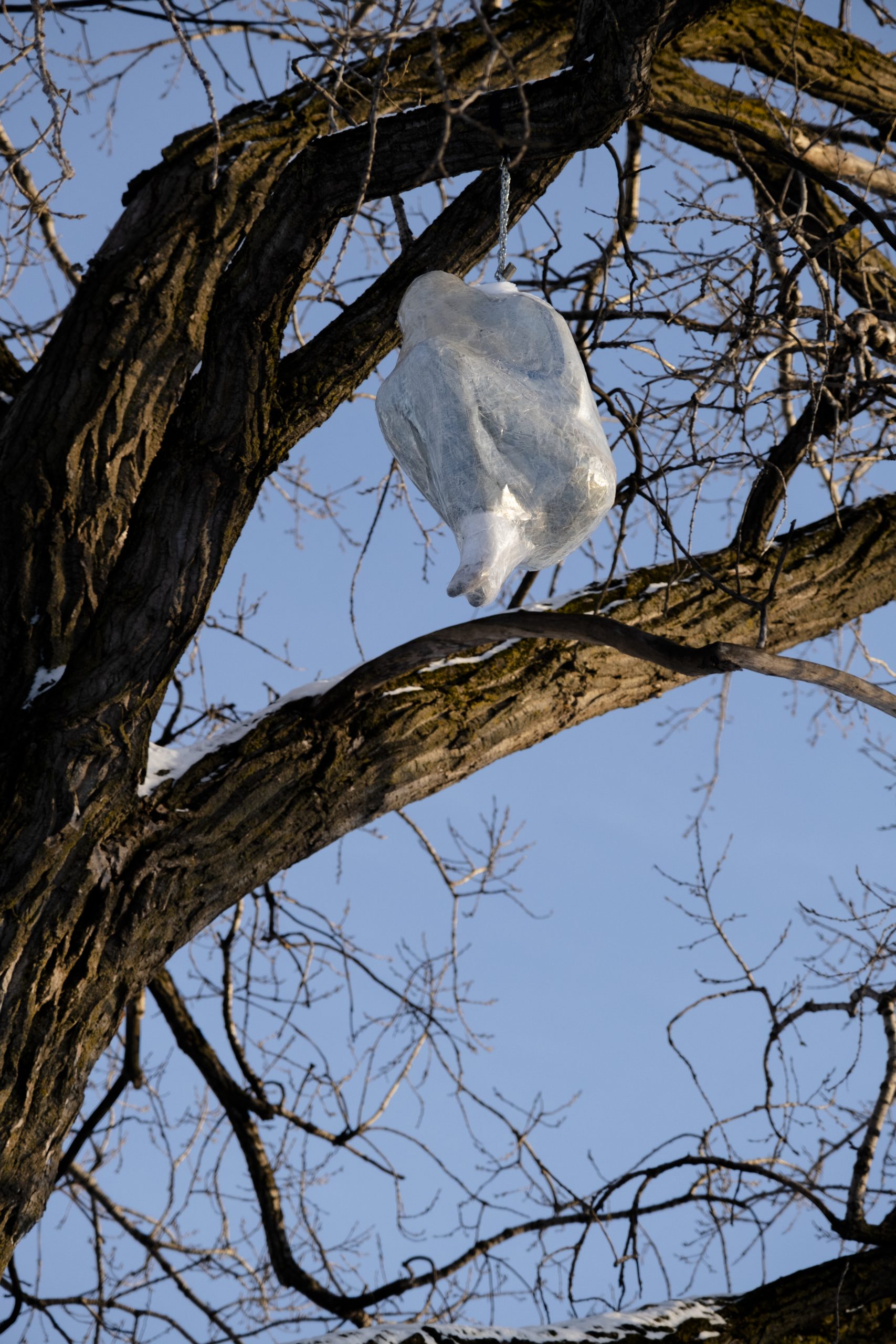 The convincing verisimilitude of Mark Jenkins’s immobile sculptures momentarily fool the public into thinking they are witnessing real people in compromising situations. Inadvertent passers-by are perplexed, unaware that the figures are works of art. In these works, Jenkins blurs the line between the fake and the real, or between art and life, inviting us to reflect on the regulation of behaviours that are deemed permissible in public.

In collaboration with EXMURO arts publics 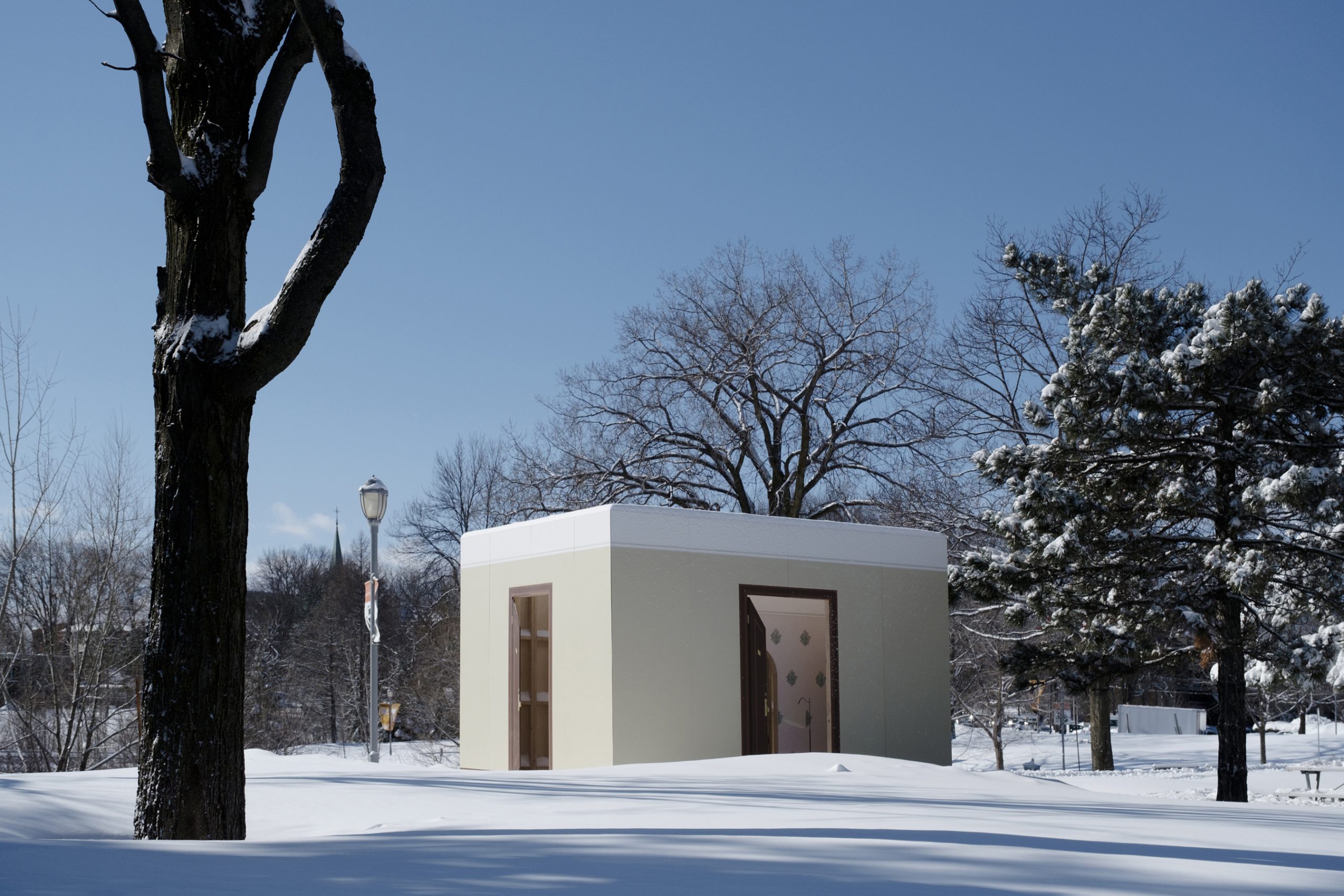 Meredith James is interested in the failure of our senses and the liminal gaps that open when what we think we are seeing does not correspond to what is really there. The staging of the architecturally deployed sculptures provokes numerous discrepancies in spatial and visual perception. By creating devices that confuse the senses, the artist reveals the unsettling inconsistencies underlying our ways of receiving the world, which can deceive us at any moment. 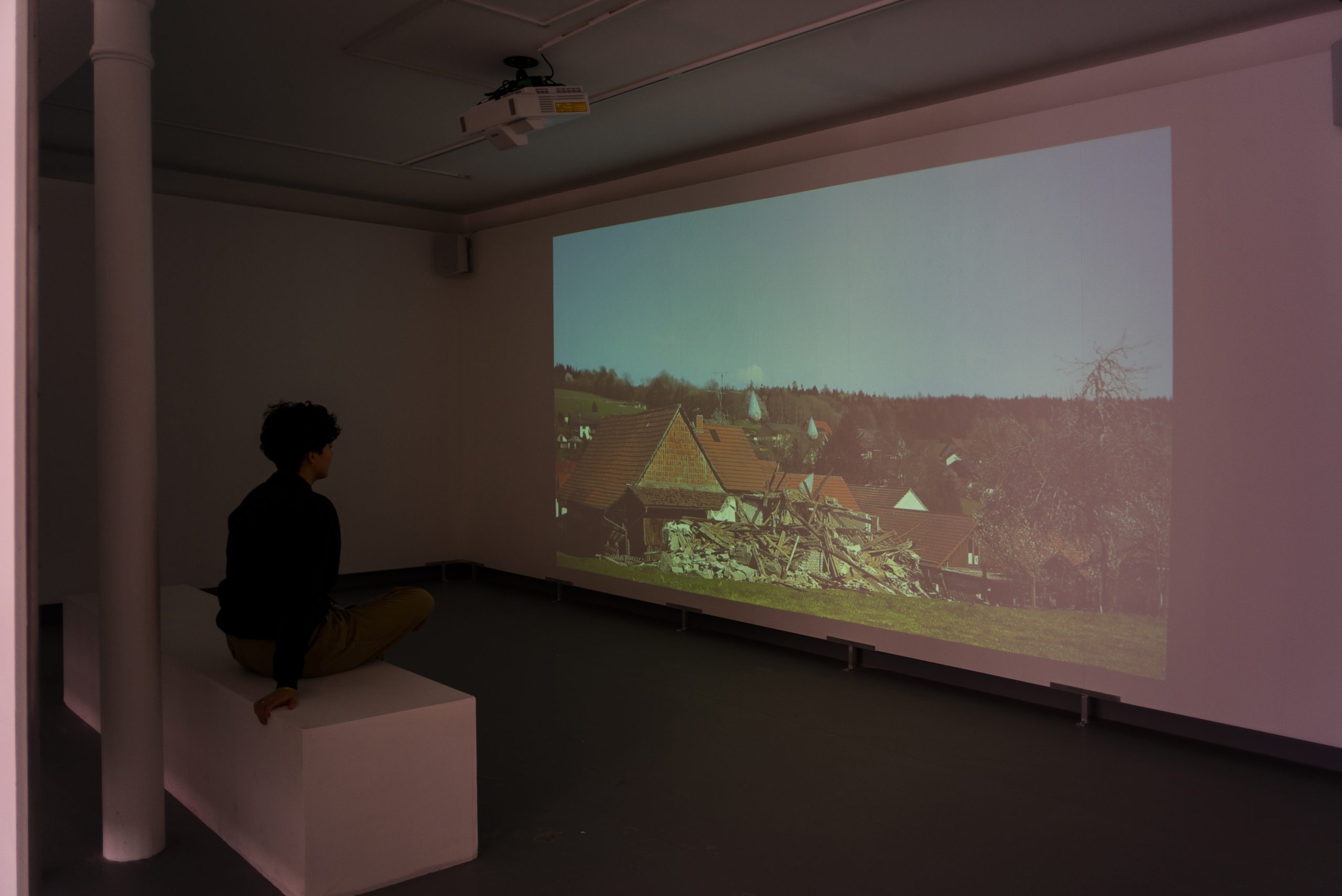 Michael Sailstorfer’s object performances trigger metamorphoses that incorporate natural forces and their effects on the fabricated. Inspired by axiomatic structures and sites marked by postmodernism, the artist seeks to defy sculptural conventions in terms of both space and duration.

Recorded over a period of eight weeks, this video appears to depict changing seasons. Strangely, however, no leaves are shed and the tree seems to revive on its own, but in a surreal shade jarring with the surrounding landscape. Sailstorfer orchestrated the work of special effects professionals who helped create the illusion of seasons, as one by one, leaves were painted then reattached to the branches. The goal of the project was to artificially reverse a natural process through human interference.

Annie Baillargeon performs before the camera, creating fictional selves in montages that multiply her image in complex compositions. She dons costumes and performs a series of highly symbolic actions in evocative settings, then with pictorial and digital techniques adds aesthetic layers over the images. Baillargeon’s work remarks upon the female body as it interacts with its environment, and upon its relationship to images. Her process also deals with transitional states and decay from a feminist perspective, using strategies of self-representation and staging. 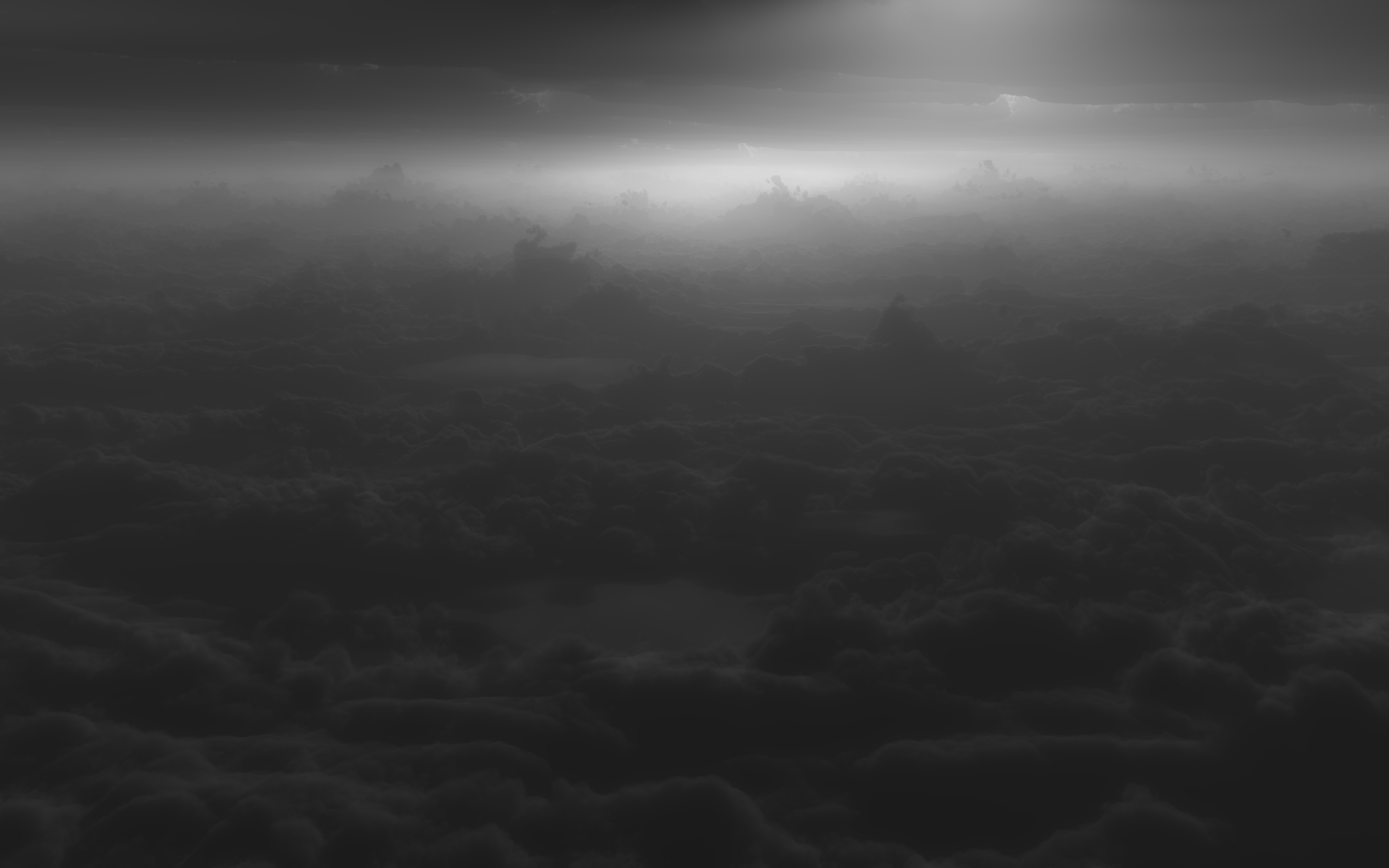 The artist offers a series of images resulting from complex research processes. If Réminiscence allows us to imagine the moment of creation of our planet, Nervures opens up to the contemplation of the microscopic, through the imagery of an electronic chip.

Alexander is known for her work as a photo-conceptualist, creating photographic readymades by producing collages of found images. Taken from magazines, advertising, and other popular media, the images develop a critical discourse on consumer society. Midway between architecture and landscaping, these two murals establish dialogue between visual elements representing nature and culture. Alexander’s work examines from a critical perspective the incorporation of landscapes inside buildings and the appropriation of nature as indoor decor. 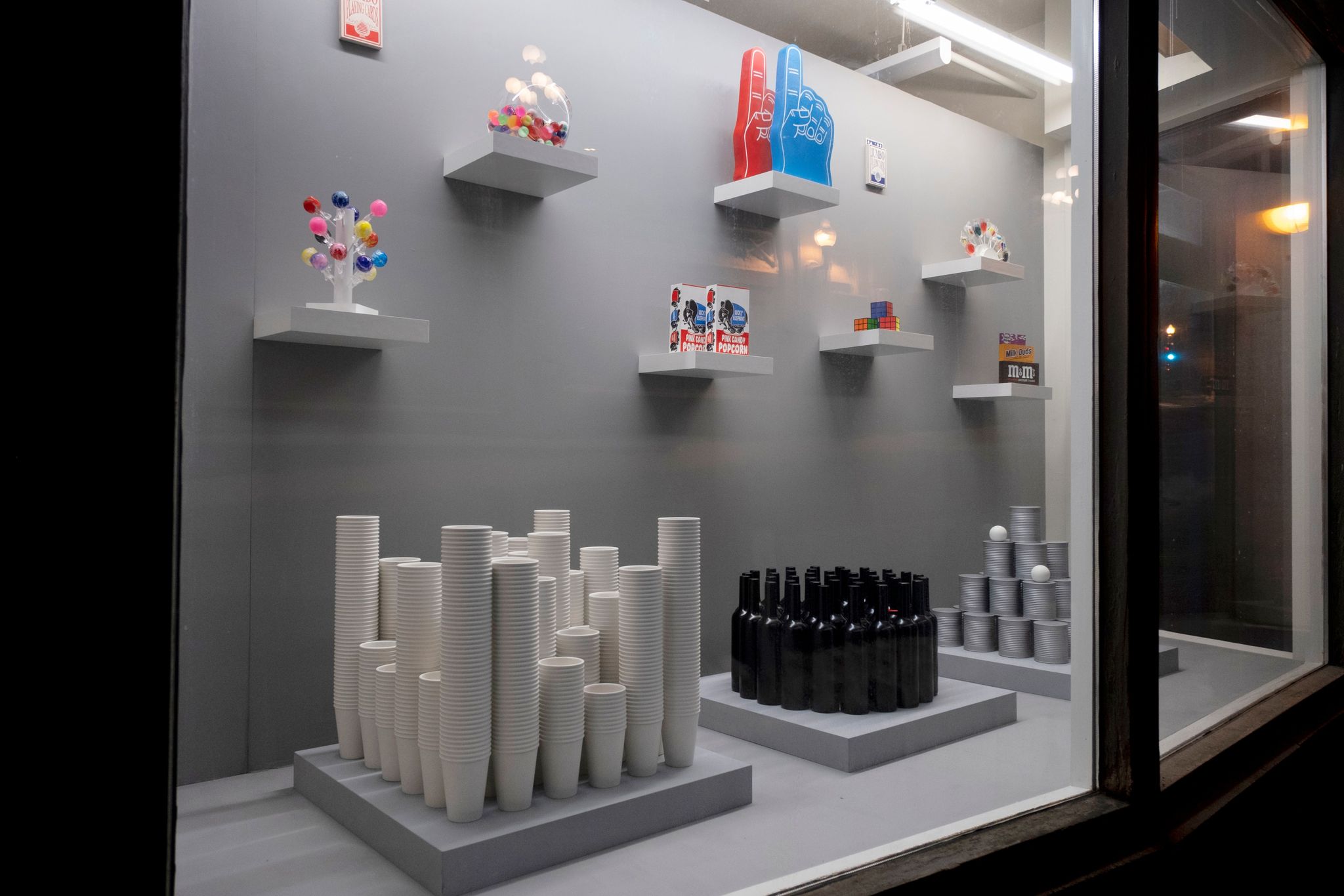 Untitled (Cube, Cylinder, Pyramid) is a site-specific installation transforming the window of Manif d'art into an exhibition space that passers-by might easily mistake for a storefront. The immaculate white window displays sculpted objects, carefully arranged on the ground and on shelves. Paired with the colourful items lining the walls like fairground prizes, the objects on the floor seem to silently echo a recently ended party. 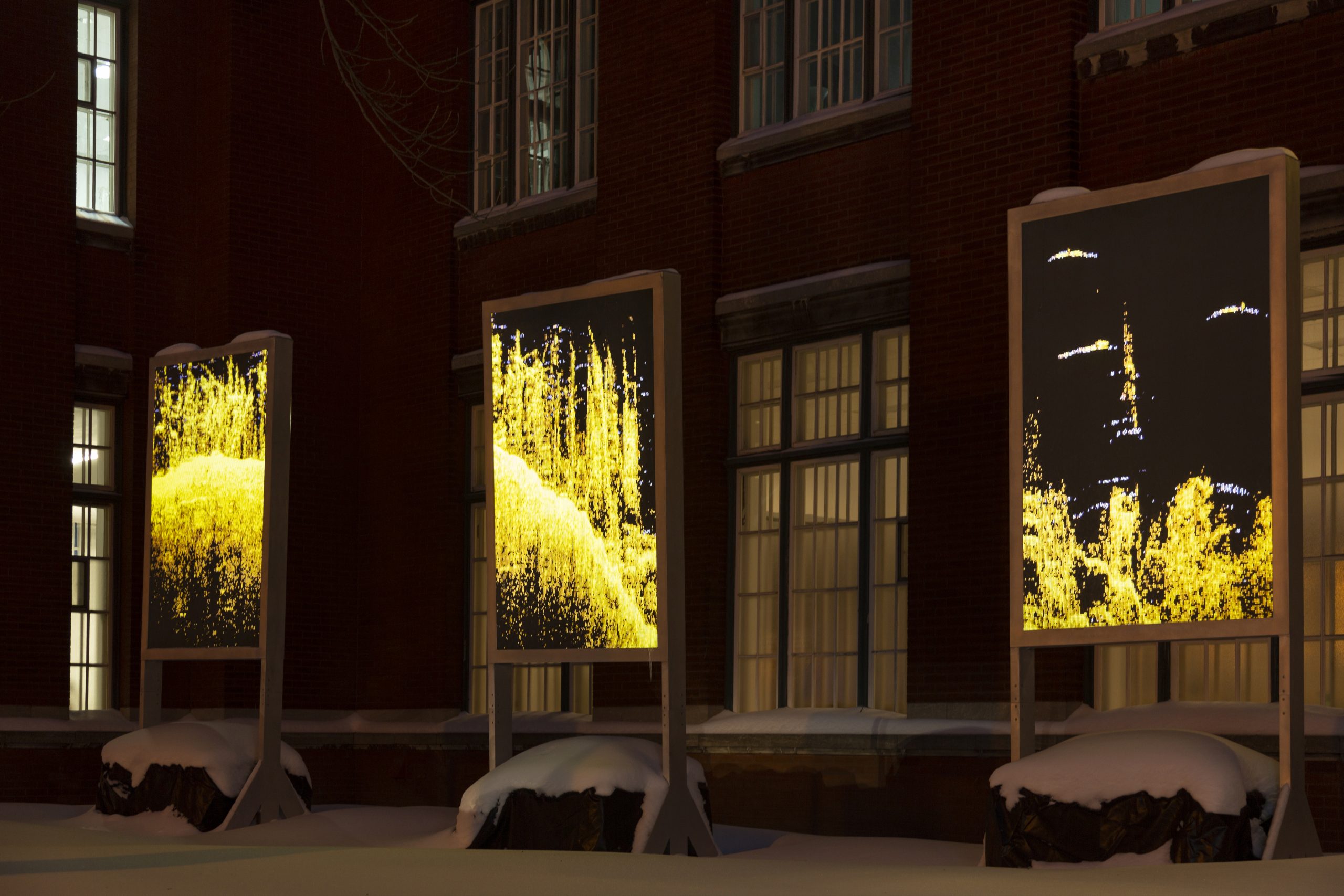 The synthetic images in the series Mémoires ennoyées were created on the North Shore, at the Manicouagan meteorite crater, the largest visible on the planet. Site of the ancient Lake Manicouagan and Lake Mouchalagane on the territory of the Pessamiulnuat people, the crater has been flooded since the Daniel-Johnson Dam was built in 1969. Abstract in appearance, the images were made using a bathymetric echo sounder to measure the depths of the reservoir. An underground forest is still there, its ghost pines rocking softly in the swell.

Dgino Cantin creates sculpture-installations that plunge viewers into a phantasmagorical and surreal world. Hybrid characters and objects of incongruous beauty populate the space, sparking wonder and surprise. Here, a seal is the setting for a surprising town, where the seasons follow the animal's movements. As an allegory for excessive urbanization or as a dreamlike location, the marine mammal offer us a new representation of what it means to identify with the land.