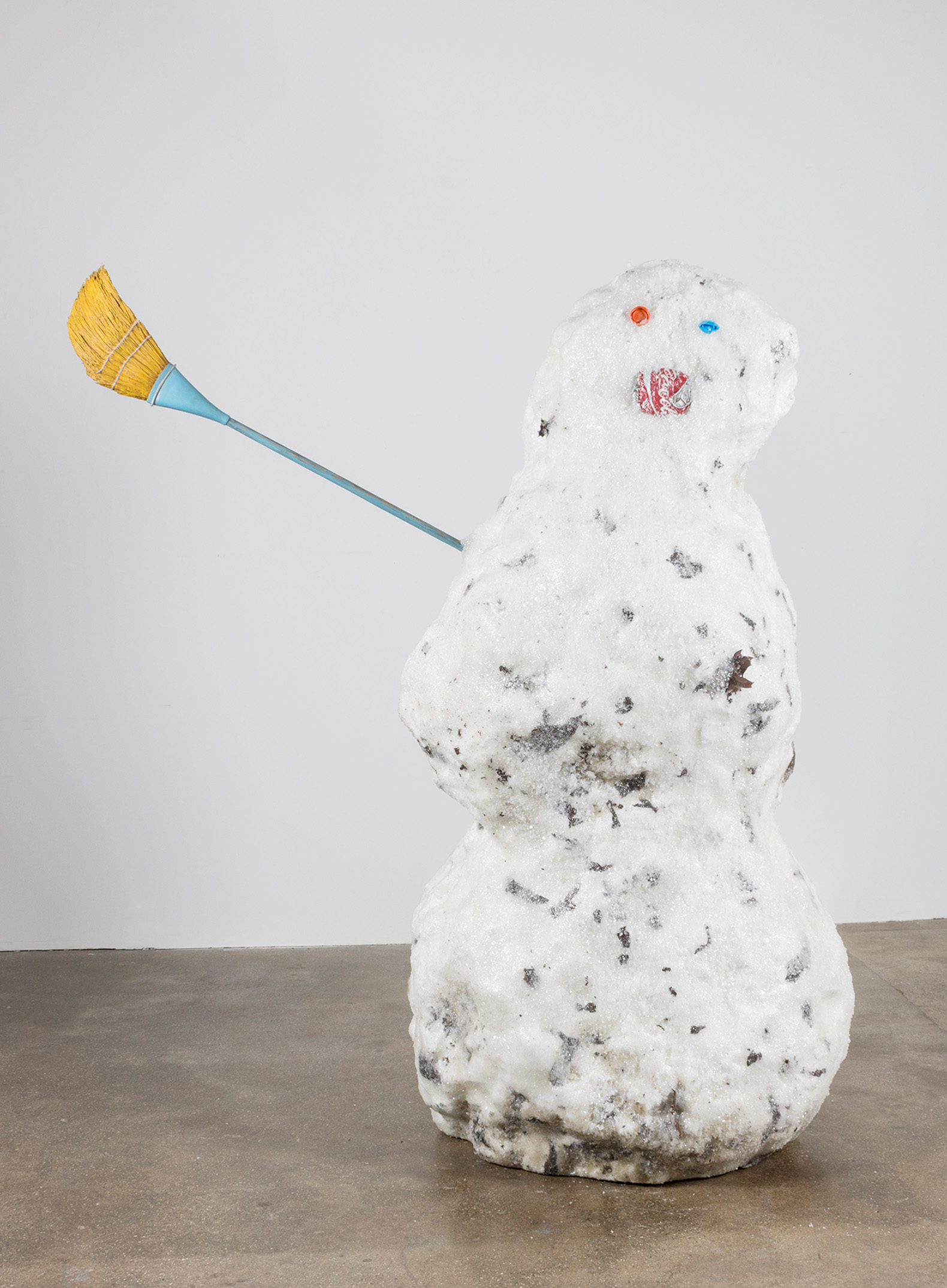 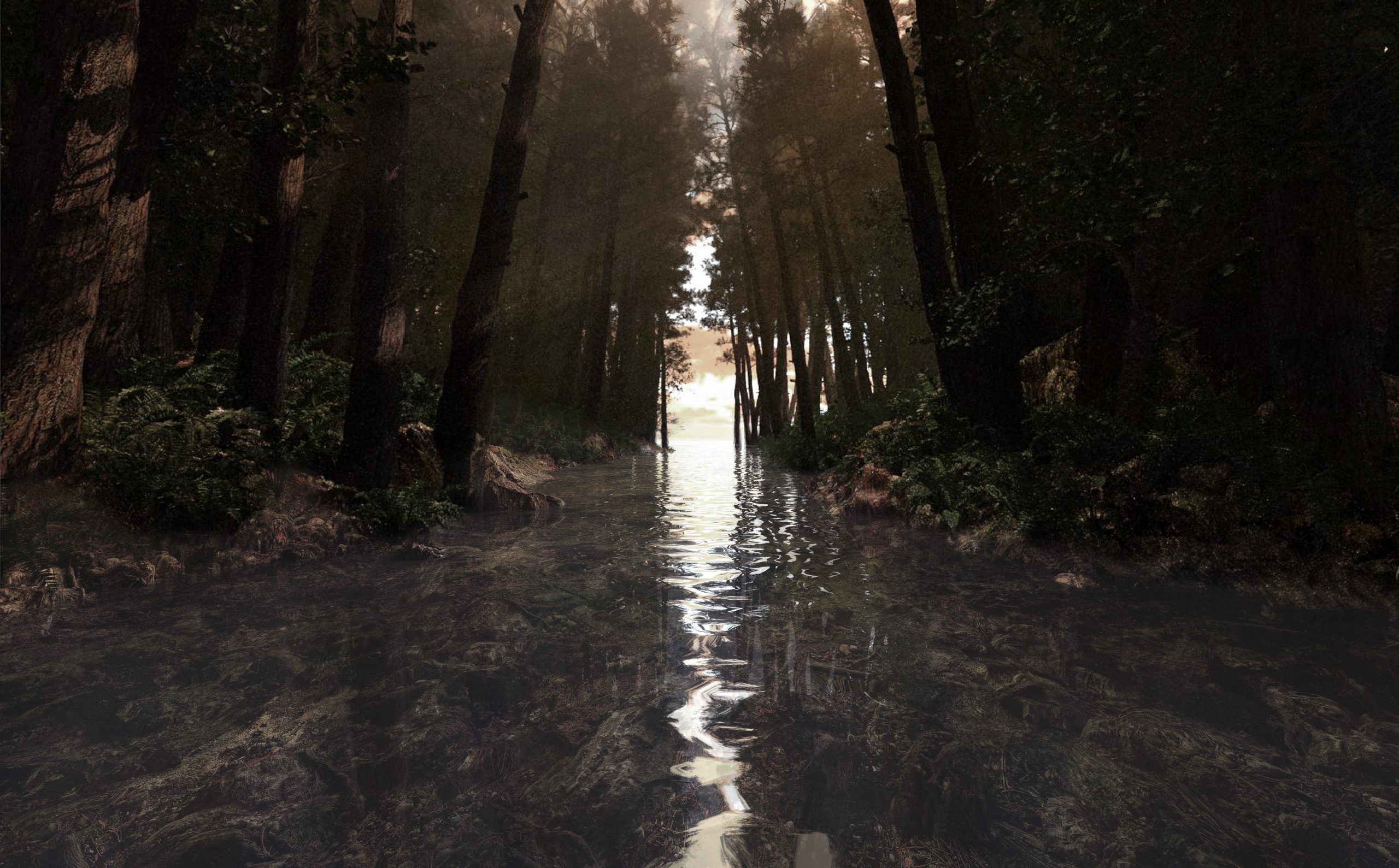 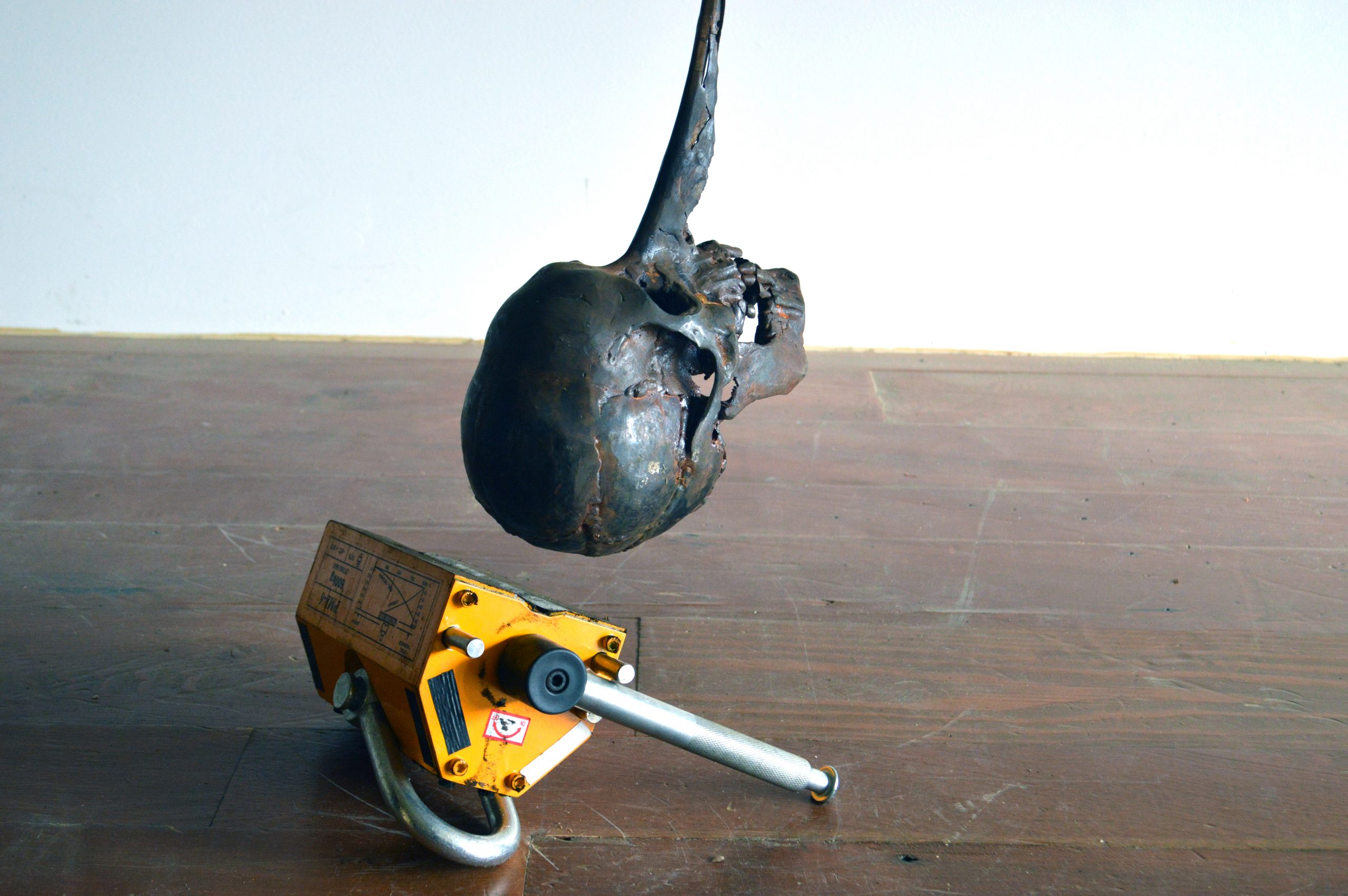 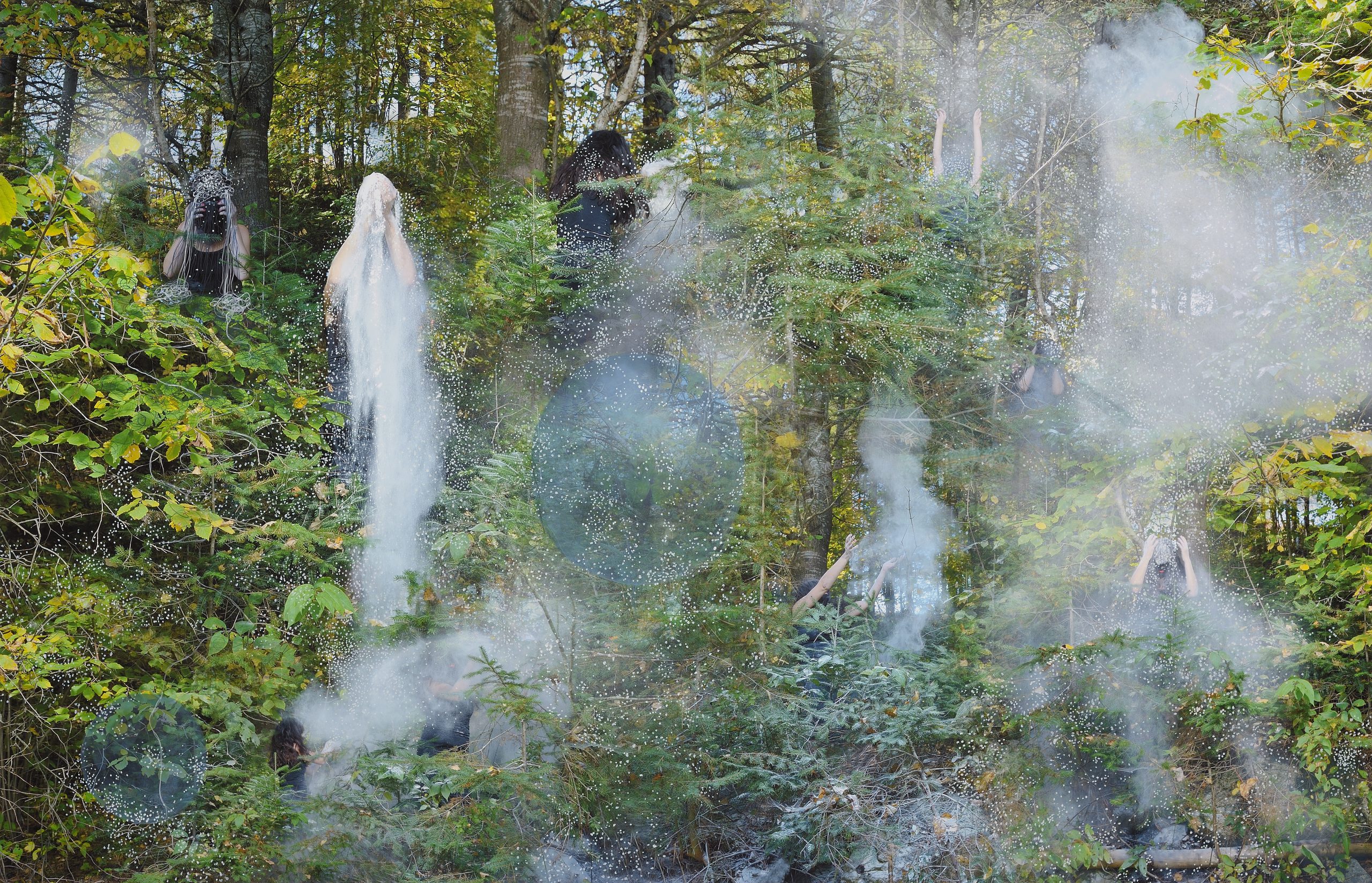 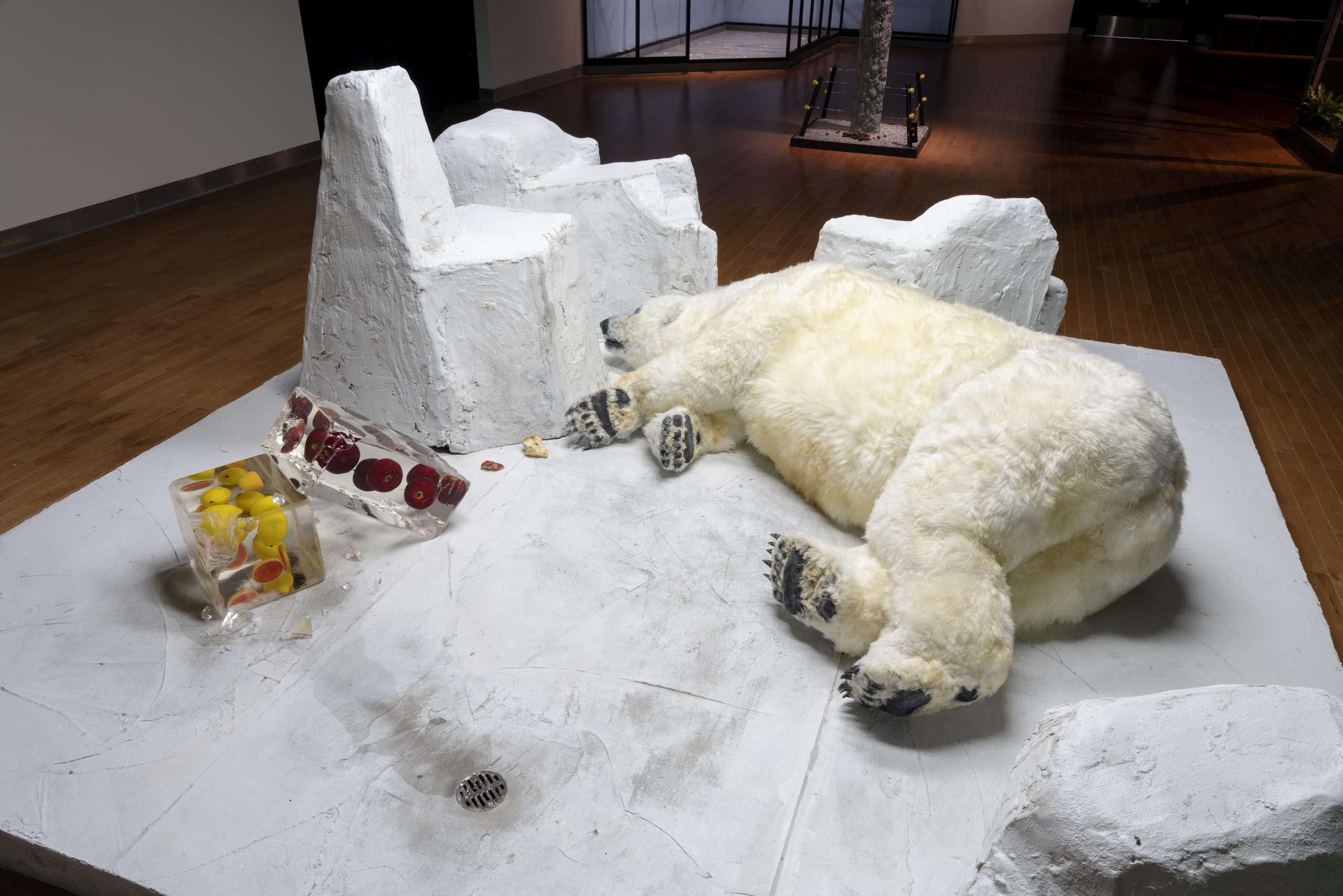 Annie Baillargeon’s photographic series explore various facets and multiple constructions of femininity. Some are displayed ostentatiously, whereas others retain an aura of mystery, like the artist’s face, which we never fully see: it is hidden under a ghostly veil in Les Secrets, covered with her hair in Les Avortements de fantaisie, disappearing into diaphanous clouds in Les Magiciennes. Baillargeon’s work often refers to motherhood, objectification of bodies, and gender performativity.

Brian Jungen draws on traditions inherited from his Dane-zaa culture to transform mass-produced consumer goods into whimsical sculptures. As he deconstructs and recombines these objects, they remain recognizable but in new forms that allude to Indigenous material culture. Jungen thus establishes parallels between the dynamics of capitalist globalization and those of colonial appropriation. In doing this, he transforms matter by bringing it to life through mixed cultural codes in his remodelling of consumerism.

Caroline Cloutier uses mirrors and large-format photographs to perform the illusion of breaking up architectural surfaces. Her photographic installations deconstruct and multiply volumes through the creation of mises en abîme. By sculpting imagined cavities and protrusions, she deflects reality in the spaces on which she intervenes. Passage and the series Pliage activate variations on these strategies of mimetic resemblance.

Gabriel Lester’s films and installations embody his desire to create ambiguous narratives that are open to interpretation. In the video Murmur, musicians play their instruments through holes in a wall. Their concealed performance underlines the gap between the cult of personality and the often-hidden life of artists backstage. Separating the artists’ bodies from their creation, this obstructing wall serves as a springboard for a critical re-examination of the paradoxes of institutions that reap the fruits of artists’ labour.

Wearing Gillian is a self-promotion action that blurs the signals of different manners of self-representation through various masks or filters. Generated by artificial intelligence and created in collaboration with an ad agency, this video uses deep fake technology to graft Gillian Wearing’s face onto those of actors. With their disembodied voices, these strange clones perform frenetic incantations punctuated by the mantra “I am Gillian Wearing,” which gradually metamorphoses into “I am Wearing Gillian.”

Glenn Kaino plays with poetic contradictions to reconcile ideas that might, at first glance, seem conflicting, opposed, dichotomous. He reconfigures components of the real and combines disparate elements to form conceptually and experientially rich pieces. In Untitled (Ricky Jay), Kaino pays double homage to magician Ricky Jay by creating his likeness and evoking his favourite trick, card throwing. Kaino shows again that, like magic, art can be evasive, tricking the eye and subverting expectations.

Jamie Isenstein plays with the notions of subject and object in a plural practice that both reduces the body to a thing and grants things the capacity for action. Currently, her artworks create a reversal in the power dynamic inherent to humans’ relations with inanimate objects. A sheet with holes, probably formerly a ghost costume, is hung on the wall. With the fabric stretched out in this way, its presence underlines the absence of the body needed to give it a shape.

Magically combining optics and digital images, Thingamajig exploits a mirror effect to contort the entire space of a room. The video shows a pair of legs, endowed with four feet, performing a comical tango. Movement artist Elena Vazintaris performs before a fun-house mirror that utterly changes her appearance. Her body is erased, and her limbs seem to move on their own, autonomously, as if self-animated. The work shows us the world through a different lens, in which the body, transformed into object or spectacle, takes on agency—the capacity to act. And so, this thingamajig assumes its own presence.

Salon chinois: White Gold is constructed around Westerners’ infatuation with Chinese porcelain, also called white gold. The installation evokes private salons containing collections of Chinese decorative art objects, once found in the homes of European nobility. The setting contains sculptures, ornaments, carpets, and various objects associated with Chinese culture. It is complemented by real artefacts and facsimiles from the MNBAQ collection and by objects created by Karen Tam. The satin tapestry, which imitates wallpaper exported from China, portrays racist acts and gestures committed against Asian people. Tam thus illustrates the violence that may be provoked by reductive, caricatured, dehumanizing representations of the other.

Karine Fréchette’s works, with their jolting interlacings, blurs, and “wakes,” refer to energy forces that are normally beyond view, such as radio waves and electrical charges. With paint, Fréchette bends the surfaces of her canvases, imbuing them with an energy that plays with how we experience space through her psychedelic aesthetic and allusions to the computer and the waves that surround us.

In the three glass aquariums filled with cloudy turquoise liquid that form the installation À perpétuité, the constant comings and goings of a mysterious creature provoke a sense of anxiety. The phenomenon never reveals its secrets, blurring perceptions, keeping us uncertain, and exposing us to an intriguing unknown species.

In her series Espaces sans espèces, Karine Payette refers to sites—zoological, domestic, commercial, or related to spectacle or collection—where animals are confined, enslaved, and conditioned. The inert white bear seems to be resigned to the loss of reference points and of freedom imposed by its restrictive shelter. Subjected to the alienation inflicted on species that are imprisoned and exploited in the name of domestication or entertainment, the animal barely shows signs of life.

Through sculptural transformations, Maskull Lasserre breathes new life into ordinary objects, creating an illusion of changeability. Playing on an aesthetic that incorporates elements of nostalgia and evocations that are sometimes macabre, sometimes humorous, his works stir a strange sense of familiarity.

In the sculpture Conscience, a palpable tension emanates from a suspended steel skull submitted to the invisible forces of magnetism. The disturbing memento mori oscillates in an indeterminate state of limbo, between life and death, rejecting its own fate.

Monochrome bleu consists of 1,649 litres of chlorinated water in an unusual container: a used dumpster waterproofed with turquoise epoxy paint. A working whirlpool bath, converted and equipped with a pump, a filtration system, and powerful jets, this installation interferes with the nature of the artwork by paradoxically transforming a banal object into a luxury object.

At first glance, Data could pass for a large-format photograph of a luxuriant spruce forest with a stream flowing through it. The title of the work, referring to computer data, reveals that it is in fact an entirely virtual landscape. This synthetic image, created from scratch from algorithms by an advanced team of computer graphics artists, presents a disconcertingly realistic trompe-l’oeil.

One Hour of Imaginary Celebrities, 2017, video.

In One Hour of Imaginary Celebrities, three NVIDIA researchers created an artificial intelligence capable of generating photographs by synthesizing nonexistent individuals from conflated composites of thousands of images found in web databases. Dizzyingly realistic, the vaguely recognizable faces in the video melt into each other in succession. The project both engenders a destabilizing effect and evokes the formidable potential of the deep fake, which today threatens the veracity of images and the protection of individual identity.

In a cinematographic fusion of time and space, reality and its reconstruction become indistinguishable. Images of an expedition to the Antarctic are interwoven with those of a concert on the skating rink in Central Park. In both sequences, an albino penguin appears, becoming the focus of attention. This quasi-documentary film attends to the distinctions between fiction and reality, under a title that gives the impression that nothing like this ever happened. Pierre Huyghe thus explores the politics of knowledge production and the way in which humans constantly remake their image of the world in order to come to grips with it.

Shimmering with an artificial glow given off by the intensity of the paint, Sascha Braunig’s pictorial space presents a saturated palette and vibrant contrasts. The paintings Dancer and Heavy Halter seem to have stepped straight out of a burlesque show. Hollowed-out silhouettes, reduced to thin, luminous lines, seem to lend themselves to an almost-carnal game of hide-and-seek on stage. With their allusions to neon signs and theatre curtains, Braunig’s portraits show the human figure in a state of perpetual performativity, in a sensory approach to painting.

Heat Current I, 2020, plexiglass and aluminum.

Drawing on the methodologies of mathematics and physics, Tauba Auerbach probes the broad dimensional spectrum of natural phenomena beyond human perception. From a distance, the works in the series Heat Current could be seen as a group of abstract paintings featuring psychedelic undulations. But when we approach these compositions, we see that they are C-print photographs. Captured with an infrared-sensitive sensor, the images reveal the spiralling backwash engendered by the encounter of warm and cold ocean currents.

Titus Kaphar is a virtuoso at producing faithful copies of historical works, which he then cuts, creases, wraps, shreds, twists, tears, or scribbles on. Erased by such alterations, some elements of the original portrayal shine through by their very absence. These violent gestures inflicted on the canvases are nothing, however, compared to the systemic violence suffered by racialized people even today. Kaphar, seeking a rewriting of history, thus brings to light perspectives ignored by the great canons of art.

Tom Friedman’s meticulously crafted works push the limits of perception and rationality toward the fantastic. The installation Open Black Box is a marvellous illustration of the Law of Prägnanz, which has it that the eye will tend unconsciously to simplify complex figures, and the law of closure, according to which the gaze is able to complete an incomplete figure through the reflex of rationalization. The cube presented by Friedman is, in effect, invisible; it is the unconscious logic of perception that brings this mental sculpture to materiality.

Snowman with Coke Can Mouth and Broom, 2017, sculpture.

Tony Tasset draws on vernacular practices and pop culture to dissect the American dream and its many mirages. He recycles emblematic images from the mass media, using them to produce striking caricatures. Snowman with Coke Can Mouth and Broom is an emulation of an iconic form of popular art: the snowman. The Coca-Cola can that serves as the mouth here is highly evocative. Like the snowman, the brand has become a universal symbol.

Boarded Up Window, Brooklyn as its title suggests, portrays a boarded-up window covered with graffiti. In its early presentations, the work was attached directly to the wall of the gallery, creating the illusion that the window was real. Artificially damaged, it seemed to be disintegrating in place. Presented as a painting in this exhibition, the work exploits the classic idea of considering painting as a window open to the world, a foundational concept for illusionist works. While preserving the mirage, this work subverts the very idea: here, the window is blocked.